HOME HORSE HISTORY NEWS CONTACTS
Ru En
OUR HISTORY
The first mention of the Weedern estate is found in the 17th century. It was located in the Darkemen district (Angerapp, Ozersk) in East Prussia and consisted of the Weedern, Reseningken, Bidushen and Grunwald estates.
In 1826, Alexander von Neumann founded a stud farm in the village of Gut Weedern. In 1895, the heiress of the estate, Louise von Neumann, married Eberhard von Zitzewitz, who was a gifted horse breeder and achieved great achievements in breeding thoroughbred horses, and also successfully landscaped the estate.
In Veedern, the land was drained, inconveniences and swamps were planted, turning them into a forest, the herd of horses was increased, and a studbook was started. Weedern became a well-known agricultural enterprise in Prussia and an internationally recognized stud farm, specializing in the breeding of purebred East Prussian horses. In 1910, in Hamburg, 16 Weedern horses received their first prizes. The stud farm annually supplied about 50 horses to the auction.

The territory of the Weedern estate at that time was 1276 hectares. The Weedern complex consisted of a large beautiful manor house surrounded by a magnificent garden, a riding hall, numerous stables and various outbuildings. All these structures were located along the perimeter of a rectangle, in the center of which was a presentation area for horses.

During the First World War, Weedern suffered greatly: 174 breeding horses were killed, the estate was destroyed. However, they managed to save the most valuable part of the herd and send it to Pomerania in advance. After the end of the war, the stables and houses for workers were quickly restored, and the herd was increased to 80 mares. The famous horses also appeared here - the mare Fane and the stallion Bulgarian Tsar, which became one of the most popular in East Prussia.

In 1929, after the death of his first wife, Eberhard von Zitzewitz, he married Anna von Sperber of Kleszoven, who belonged to the famous old Prussian family, also engaged in horse breeding. The merger of the two private factories has increased their efficiency. Now the herds were in Reseningken, Bidushen and Weedern. In 1934, Eberhard von Zitzewitz died, and his wife continued the joint business. During World War II in 1944, before the Soviet offensive, 380 people and 260 horses left Weedern and Pomerania took over again.

After the war, in 1946, a military state farm No. 138 was formed on the territory of the village. People from different parts of Russia came to live here: from the Smolensk, Ryazan, Pskov, Novgorod regions. The state farm raised cattle, were engaged in agriculture: they cultivated vegetables, grain crops. From 1947 to 1962, the office of the state farm was located in the former building of the manor house. Since 1963, the Suvorov General Education School has been located there. Children from nearby villages studied at the school: Borka, Kadymki, Zhuchkovo, Ryazanskoye, Prudnoye, Dubrava. Also in the building of the former manor house there was a culture house, a canteen, a post office, and state farm farms were located in the former buildings of the stud farm.

In 2000, the territory and buildings of the Veedern plant were acquired by a new owner, who built a modern school for children from nearby villages. At present, thanks to the efforts of the new owner, the Weedern estate is being carefully restored according to old photographs and drawings; a large farm has been organized here, including breeding horses, sheep and diversified agricultural production, which allows us to continue and develop the long history of the old stud farm. 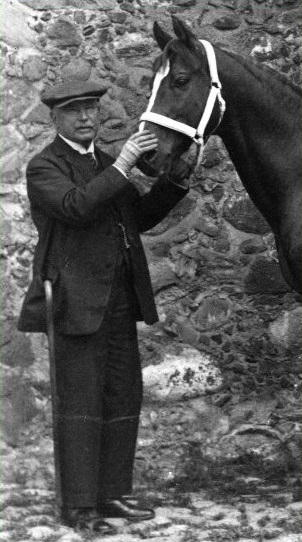